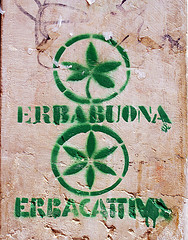 In Javinsky-Wenzesk v. St. Louis Park, the City of St. Louis park gave a couple landlords an ultimatum: Either evict a long-term tenant with a valid lease or lose your rental license. The landlords sued the city, seeking an injunction. While the legal issue (Whether the city’s ultimatum violated the landlords’ due process rights) is interesting and novel, the underlying facts of this case are not to be missed. It is truly rare to find a case that involves theft, drugs, and eviction!

This tale starts simply. A couple own rental property in St. Louis Park. They rent it to another couple, under a two year lease. The tenants have an adult son, who isn’t on the lease, and doesn’t reside at the rental property. Now, this is where things get good.

The adult son robs a drug dealer, stealing a number of items including drugs. The police somehow hear about this theft (Did the dealer call the cops?), get a warrant, and raid the tenants’ apartment, where they find a bag of marijuana belonging to the tenants’ son. The police then send a letter to the landlords, declaring them in violation of the city’s “Crime Free/Drug Free and Disorderly Use Lease Requirement” (St. Louis Park Ord. 8-331), and ordering that they terminate the lease with their tenants. The landlords are offered no hearing and no right to any form of judicial or administrative appeal. The landlords are told that if they refuse to evict their tenants, they will face an administrative license violation fee of $750 for each month that they fail to terminate the lease. Finally, the letter informs the landlords that the city will not renew their rental license until all past due fees are paid.

Ultimately, the landlords capitulated to the city’s demand by reaching an agreement with their tenants. The tenants moved to a new apartment down the street.  But, the landlords were unable to re-rent the apartment.

The City Likely Violated The Landlords’ Due Process Rights

Judge Tunheim noted that the city’s law, which is designed to keep villains and scofflaws out of the city, is ineffective. The law doesn’t require that the tenants leave the city. In fact, the tenants in this case still live in the neighborhood. So, the landlords are the only ones impacted by the city’s regulation.

I’ll keep following this one to see where it lands. But, it seems at this point that the landlords’ suit may protect the rights of landlords and tenants statewide. Kudos to them.