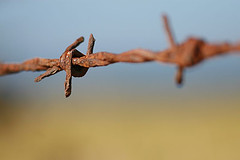 Just in time for cabin season, the Minnesota Court of Appeals has handed down a decision in a lakeshore boundary dispute. In In re Petition of Ruikkie the court addressed what to do when a survey shows a bay that never existed.

The seeds of this dispute were planted way back in 1885, when the government surveyed neighboring lots along Mitchell Lake. The government survey showed two lots that fronted on a bay. The problem was that the bay didn’t exist. Not then, not ever. The property dispute is best understood by looking at the map the Court of Appeals drew and appended to the end of its decision. (Who knew the court could draw?)

The court summed up the legal question like this:

The finding of error arises from the survey showing a bay extending out from the southeast part of Mitchell Lake. By all accounts, this bay does not exist and has never existed.  The question is what to do. We cannot live with the fiction of a non-existent bay in describing valuable lakeshore real estate that people are buying, selling, and developing.

The Court of Appeals said that the trial court should use certain tools to figure out what the survey really means. Only if those tools fail, should the trial court resort to the doctrine of practical location to locate the boundary:

Only if a government survey, plat, or metes-and-bounds description is so flawed that there is a hopeless ambiguity in locating a boundary and if there is not a federal or state standard, caselaw, principle, or surveyor’s analysis available to resolve the ambiguity, a practical location of the ownership line between neighboring landowners may be a basis for resolving the problem.

The Court of Appeals also held that the doctrine of practical location can be applied to Torrens property in Minnesota, even if the property was registered before enactment of Minnesota Statute 508.02.

The Court of Appeals sent the case back to the trial court to follow its road map to locate the boundary of the lakeshore property.