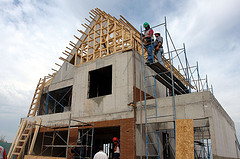 contractor’s mechanics lien can take priority over a previously-recorded mortgage only if the contractor’s work related back to “one continuous project of improvement” that started before the mortgage was recorded. Logic would have it that the construction of a house, starting with excavation and continuing through completion, would constitute one continuous project. Not so, says the Minnesota Court of Appeals.

A Fickle Owner Changes His Mind, A Lot

This is the story of a somewhat fickle property owner.  He bought a lot, where he initially planned to build himself a home.  In August 2005, he hired an excavator to clear a path onto the lot.  Then, instead of building a house for himself, he decided he would build a spec home.  A few months later, he entered into an agreement to sell the lot, but without a spec home.  Later still, the new buyer of the lot decided that he wanted a home after all, so plans changed to include a home. The property was sold in October 2006, at which time a lender financed the construction of the home and recorded a mortgage against the property. After the mortgage was recorded, Big Lake Lumber and DesMarais provided labor and material for the construction of the new buyer’s home.

The timeline of this case is important.  Here it is:

The Relation-Back Doctrine: A Quick Primer

A quick primer on the “relation-back doctrine” will be helpful to understand what the appeals court did here. Here goes.

A contractor or material supplier to a construction project is entitled to record a lien against the property if they aren’t paid. Minnesota’s mechanics lien statute  provides that:

All liens, as against the owner of the land, shall attach and take effect from the time the first item of material or labor is furnished upon the premises for the beginning of the improvement, and shall be preferred to any mortgage or other encumbrance not then of record, unless the lienholder had actual notice thereof.

So, practically speaking, here’s how this works: Let’s say that Joe Excavator is the first one to perform a visible improvement to the property by moving dirt around. In the 2 years that follow Joe Excavator’s work, lots of other contractors perform work on the project. For the purpose of determining priority, all of the contractors’ mechanics liens are treated as if they were recorded against the property on the very first day that work started on the project.  That is, as long as the project is deemed “one continuous project of improvement.”

When Is Construction Of A Home Not One Continuous Project?

Big Lake Lumber and DesMarais argued that their liens should relate back to the excavator’s 2005 improvement.  Their argument went like this:

The Minnesota Court of Appeals rejected this argument. Instead it held as a matter of law that Big Lake Lumber’s and DesMarais’s work was not a part of the same continuous improvement as the 2005 excavation work. Therefore, their liens did not relate back to the 2005 excavation, and the lender’s mortgage had priority over their liens.

The appeals court held that the determination about whether post-mortgage work is part of the same continuous project as the pre-mortgage work should turn on four factors: (1) the parties’ intent; (2) the contracts’ scope; (3) the financing; and, (4) time lapsed. While the court considered each factor, its focus seemed to be overwhelmingly on the intent of the property owner, although he was not a party to the case (he had already defaulted on the mortgage, and walked away from the property).

At the end of the day, the appeals court determined that it wasn’t enough that the pre-mortgage excavation and post-mortgage work all contributed to the construction of a house.  The mere fact that a house resulted from all the work was not sufficient to prove that the house was “one continuous project.” To the contrary, the excavation was done for the original owner, so that he could build a home for himself.  The post-mortgage work was done to build a home for the new buyer.  The court held that different homes = different projects.