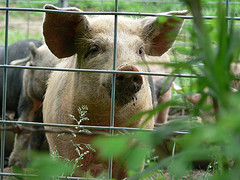 Update (August 2, 2012): The Minnesota Supreme Court knocked a blow to mom and pop organic farmers yesterday in its ruling in  Johnson v. Paynesville Farmers Union Coop.  The Court disagreed with the Minnesota Court of Appeals, and affirmed the trial court’s ruling that pesticide overspray does not constitute trespass in Minnesota.

Update (Oct. 27, 2011): The Minnesota Supreme Court has accepted Johnson v. Paynesville Farmers Union Coop for review. The case pits a small mom and pop organic farmer against the pesticide-spraying farm cooperative next door.  The pesticide sprayers sprayed mom and pop’s organic fruit, and voila, the fruit is no longer organic. Mom and pop sued for trespass.

At first, mom and pop lost.  The trial court decided that pesticide spray was not a trespass. But, the Minnesota Court of Appeals disagreed with the trial court, and handed mom and pop a victory.

Alas, the victory may prove to be short lived. The farmers union filed a Petition for Review with the Minnesota Supreme Court, and the Supremes granted review.

Stay tuned.  I’ll keep you posted on this one.

Original Post (Aug. 2, 2011): In Johnson v. Paynesville Farmers Union Coop, the Minnesota Court of Appeals held that chemical pesticides drifting over from a neighboring field can constitute a trespass.  A10-1596, (July 25, 2011).  The Court took pains to distinguish its prior holding in Wendinger v. Forst Farms, Inc., that invasive odors emanating from a neighboring pig-feed operation did not give rise to a trespass claim.  662 N.W.2d 546 (Minn. Ct. App. 2003).  The distinction lies in the way that the chemicals in Johnson interact with the land.  While the pig odor disrupts use and enjoyment, the chemical spray has a physical effect on the property.  It “descends and clings to soil or plants, killing organisms.” Sounds like a Movie, right?