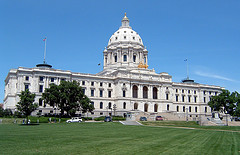 The Minnesota Supreme Court threw the first punch.  On June 24, 2010, the Minnesota Supremes pulled the rug out from under cities and property owners by dramatically changing the standard that cities had used for 20 years to decide whether to grant a variance.

For a city to grant a variance, Minnesota law has long required that a property owner show that there would be “undue hardship” without the variance. The statute defines “undue hardship” to mean that “the property in question cannot be put to reasonable use if used under conditions allowed by the official controls.”

For 20 years, Minnesota courts and cities found the “undue hardship” standard satisfied so long as the “property owner would like to use the property in a reasonable manner that is prohibited by the ordinance.” This was referred to as the “reasonable manner” standard.

Then, in Krummenacher v. Minnetonka, the Minnesota Supreme Court dramatically changed the standard. In Krummenacher, the Supremes decided that the long-accepted “reasonable manner” standard was wrong.  Instead, the Supremes held that a property owner must show that their property cannot be put to any reasonable use without a variance.  The decision essentially stripped cities of their authority to grant variances in all but the most extreme circumstances.   In a message to residents on its website, the City of Minnetonka explained that the Krummenacher decision tied its hands.

Today, the Minnesota Legislature struck back by passing HF 52.  The bill reverses the Krummenacher decision by changing the “undue hardship” standard to a “practical difficulties” standard. Under the new law, a variance may be granted if the property owner shows that there are “practical difficulties in complying with the official control.”  “Practical Difficulties” means “that the property owner proposes to use the property in a reasonable manner not permitted by an official control.”

The legislature has undone the Krummenacher decision just in time for summer–I mean, variance season!